The Benue State governor, Samuel Ortom, has fired a salvo at the Federal Government of Nigeria, challenging them to launch an offensive attack at the Fulani herdmen terrorising the country much as they successfully prioritize the arrest of Nnamdi Kanu outside of the Nigerian shore.

The outspoken governor vents his anger in a tweet he posted on his official Twitter handle, lashing out at the Federal government of Nigeria to exhibit the same zeal used in arresting Nnamdi Kanu on killer herdsmen that are wrecking havoc on the innocent Nigerians. He noted that the killer herdsmen have claimed responsibility on several occasions for the killing of many Nigerians, and therefore sees no reason they should not be treated a hard way.

If the federal government has the capacity to arrest Nnamdi Kanu in a foreign land, they should exhibit the same zeal to arrest armed Fulani herdsmen who are terrorizing our country. The herdsmen have claimed responsibility for the killing of many Nigerians.

Recall that Benue state is one of the worst-hit state in the attacks by Fulani herdsmen. A lot of innocent Benue indigenes have been killed with several properties destroyed. The governor, who felt the Federal government has not been doing enough to protect his people, has been on collision course with the Federal government in a number of times.

Ortom was so frustrated that he, at a time, called on the people of Benue state to rise up and defend themselves. That explains his level of frustration at the alarming rate of insecurity in the land.

He, hereby, noted that if the Federal government could exhibit such zeal as to arrest Nnamdi Kanu in a foreign land, applying such zeal and seriousness to the activities of the killer Fulani herdsmen will clear the country of the mess. 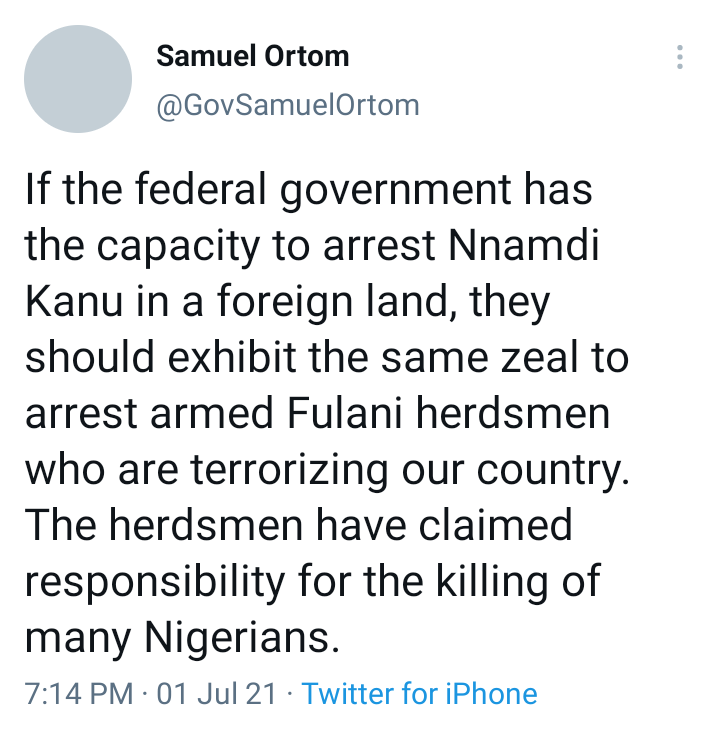