A tweep has trolled the former Minister of Aviation, Femi Fani-Kayode, saying the embattled Buhari’s Minister of Communication and Digital Economy, Mallam Isa Pantami, would, by God’s grace, be Nigerian President in time to come, much in solidarity with the underfire minister as regarding the trending issue linking him with terrorism. 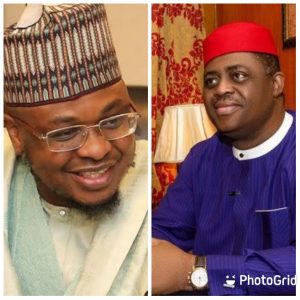 Pantami has been underfire for sharing radical views that supports acts of terrorism sometime in the past, and as a result, many have been calling for his resignation. Femi Fani-Kayode, who also believed the embattled Minister should throw in the towel, has mounted his twitter page to share his opinion in a series of tweets on Friday.

In his words, he tweets:

There is NO place in any civilised nation for a terrorist who delights in killing his compatriots in the name of his faith. No matter who supports or defends him,the Nigerian people will NEVER accept or bow to the dictates& salafist philosophy of a violent& unrepentant jihadist.

Nigeria is a secular state. We oppose those who say otherwise and we deplore those that believe that they can continue to ignore the sensitivities of millions of Nigerians by playing down the dangers and damage of having a man like Pantami in Government. It is deeply insulting.

However, a tweep, Shamsu Lawal @shamsulawal700, who seems to be on the side of Pantami taunted Fani-Kayode, saying “Pantami will be Nigerian President in time to come Insha Allah.”, much to the disdain of other twitter users.