A Nigerian hip-hop singer, songwriter and rapper, Divine Ikubor, popularly known as Rema, has reportedly deleted a tweet he posted 10-week ago to promote the investment firm owned by Joshua Dominic, who recently arraigned by the Police for defrauding investors a huge amount of money worth over N2 billion.

The Mavins records act,  in a tweet posted via his official Twitter handle, 10 weeks ago commended Brisk Capital, an investment firm whose Chief Executive Officer, Joshua Dominic, has been arrested for allegedly diverting over N2 billion.

The Lagos operatives of the police special fraud unit (PSFU) arrested the CEO following the petition filed against him investors and verified intelligence reports assembled on the activities of the company.

Hotnewsinnaija.com had earlier reported that Joshua was allegedly lured victims via social media and publications where he claimed to be a financial investor who manages funds for individuals and companies.

After his arrest, a tweet the “Dumebi” crooner posted via his official handle on March 11 gained attention. The singer stated in the post shared a photo showing wads of naira notes he described as his ROI from Brisk Capital.

“Hustle Thursday, ROI from my investment with @briskcapitalLTD just came in, nice one my gees!” 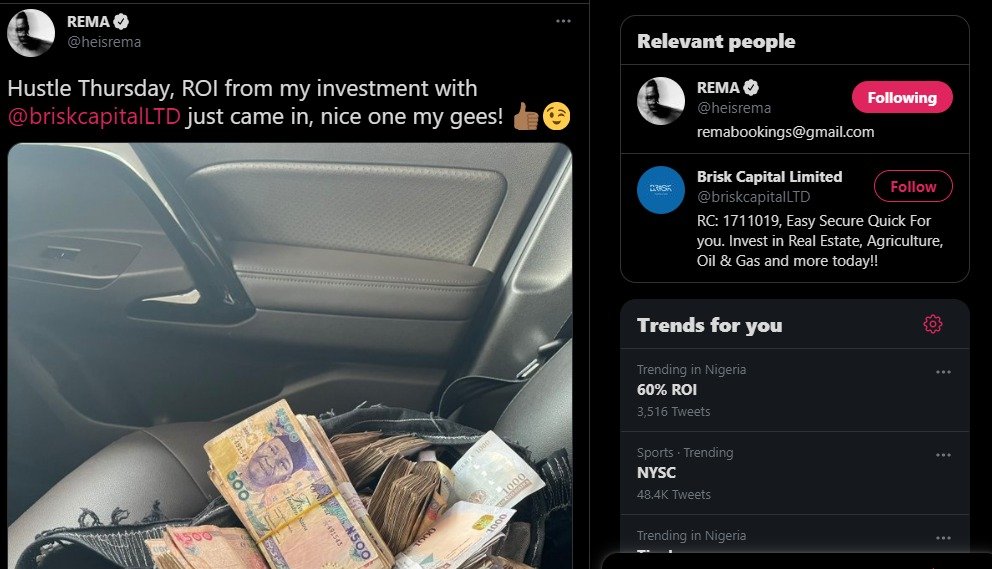 Speaking about the case the PSPU noted that Joshua who had diverted the investment funds belonging to over 500 investors had been arrested and he has confessed to his crime pleaded to be given time to return the monies.

According to PSPU, Joshua will be charged to the Federal High Court as soon as the strike by the Judiciary Staff Union of Nigeria (JUSUN) called off its strike.

Yeni Kuti Clears Air On Why His Brother Seun Kuti Walked Out On Sanwo-Olu at Her 60th Birthday Party.