Video: He Did Not Last for 5 Seconds – Ka3na Admits Having S*x With Praise.

It was an interesting episode on Tuesday in the Big Brother Naija Reunion show as several untold secrets between the Lockdown Housemates were revealed.

One of the secrets hidden from the camera during the BBNaija Lockdown season was revealed by Ka3na during an argument between her, Praise and Lucy as she disclosed she engaged in sexual activity with Praise during the show.

During the interaction between the ex-housemates and Ebuka, Dorathy was asked if she knows about Ka3na and Praise aggressive cuddling and she said all she knew about them was that they always share the same bed but she did not know anything about it and directed the question to Ka3na.

Responding, Ka3na confirmed there was aggressive cuddling between her and Praise. She said she was drawn to him because she feels they are in the same cycle since she had separated with her husband and Praise too said she has a fiancee, which means that they didn’t want much from each other outside the house. 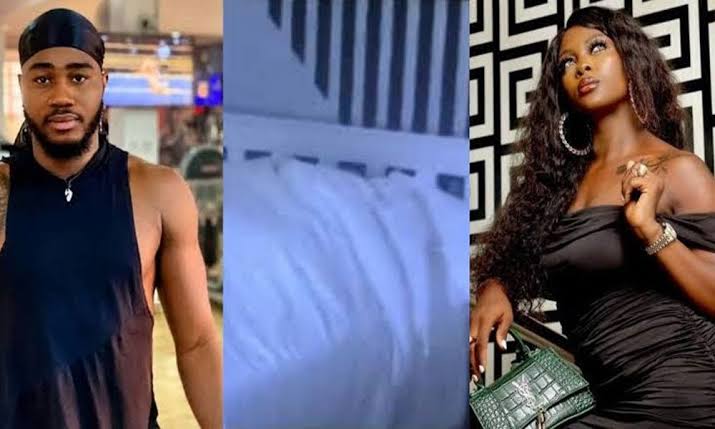 She stressed that she intentionally have s*x with Praise because she heard about the conversation he had with Lucy and Dorathy that he’s aware that she liked him but he’s in the house just for the game and he can never have anything to do with her, speaking low of her!

Ka3na added she did make sure it did not happen in his bed, saying she put him to her bed and f**ked him and to her surprise, he did not even last up to five seconds. She noted further that she left him on the bed and went to the sitting room.

It was at that moment Ebuka got surprised by the revelation and he asked again “you mean he didn’t last what?” And she responded, five seconds!

Speaking further, Ka3na revealed that Praise felt he didn’t perform well in the house and he wants to come and prove himself to her.

She also said that there was a day Ozo was in her room and Praise waited for him to leave so that he will have all chances to get down with her again and he indeed had the chance but he still didn’t last for one second.

Watch the video below:

Kaisha Argues With Neo, Calls Him A Liar for Denying Having Feelings for Her During BBN Show.