The arrested Traditional Ogboni King during the July 3rd Yoruba Nation rally, Tajudeen Bakare has disclosed the reason why he did not use his power to disappear and escape from the Police custody.

Bakare spoke about the whole incident and what he experienced in the Police custody in an interview with BBC News Yoruba on Monday, 30th of August 2020.

In the interview, the Oba Ogboni Abalaye debunked the rumours circulated that he denied what he had said during the Yoruba Nation rally after he was arrested with his aides by the Officers of the Nigerian Police.

He noted that he did not deny coming from the rally but they were, indeed, not arrested at the rally venue, however, he was being careful not to succumb to the allegations being laid against him and his six aides arrested with him.

Read Also: Rotimi Amaechi: After 2023, I Will Sleep, Obtain a PhD And Go Into Teaching.

Ogboni King said the reason why he said another thing is that it is good for one to apply wisdom in everything and it will not be good enough for the person that said he’s fighting for people to accept to die.

He stressed that if it was another person that experience what he did experience between the 3rd of July and 4th of July, 2021 that he was arrested by the Police, that person would have been dead by now.

The Ogboni King stated that he heard people asking why he did not use his traditional power to disappear from the Police custody.

Responding to this, the Ogboni King noted that he did not use his power to disappear because he’s not the only one in the police custody and if he does, what will be his gain while all his aides are still inside their custody. 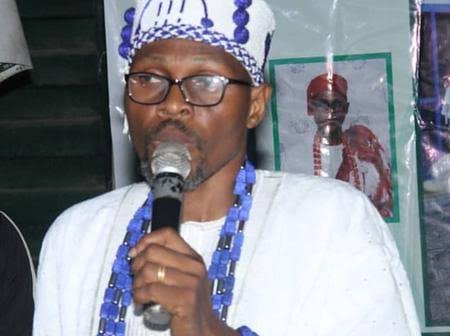 He stressed that he decided not to disappear in order to be able to protect his aides and those that were arrested with him.

Speaking further, Ogboni King rubbishes the police allegation that he was the one that killed the hawk girl that was found dead during the Yoruba Nation rally.

He noted that even though, he participated in the rally, it was not at the rally venue he was arrested and he did not kill anyone because no gun was caught with him the day he was arrested.

He added that what he wants to let the people understand is that police officers did not torture him in their cell but there are some things he experienced there that is more severe than being tortured by them.

However, he disclosed that all that has happened to him would not change his decision to continue joining the struggle to secure Yoruba Nation because he will still make himself available if another rally is being staged.

#BBNaija S6: Why I Cried When Sammie Was Evicted – Jackie B