Big Brother Naija Season 6 Housemate, Liquorose has disclosed how disappointed she was when she discovered that Emmanuel nominated her as one of the Wildcards in the House.

The Shine Ya Eyes Housemate who is regarded as the most popular among others due to her larger fan base on social media has berated Emmanuel for picking her as a Wildcard despite how closed they are.

Emmanuel and Liquorose have been matched by fans on several occasions to be in a situationship due to the way the two Housemates used to interact with each other.

While the two love birth had also proved it as they have been sighted many times cuddling and partially romancing each other in the Big Brother Naija House.

Read Also: #BBNaija: “Can We Just Skip It” – Maria Responds To Pere’s Profession of Love To Her [Video]. 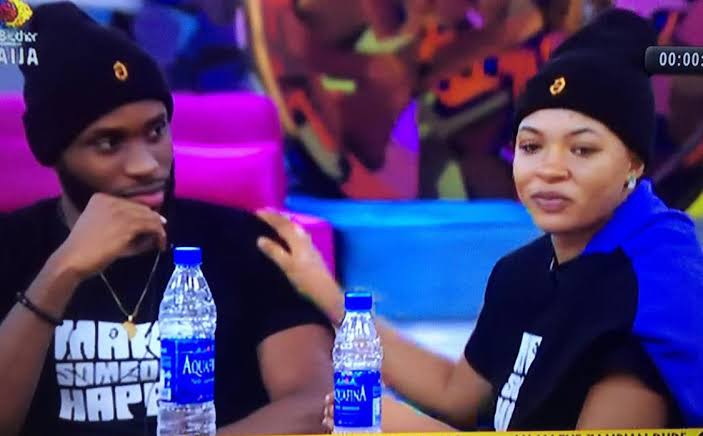 Liquorose while having her Diary session with Big Brother on Tuesday evening said Emmanuel is a fake person and she feels betrayed by him – Someone who used to confess to her how much he likes her.

” He did not say anything about it and this is someone who says oh! I like you, blah blah blah! I want to get to know you, he’s like showing feelings here and there.”

“But right now I’m kind of feeling different about him, somehow, because I’m someone who already has trust issues before.”

” So, it’s like is this guy even worthy of being my friend or is he actually like a fake person or something.”

“When you(Biggie) called my name and I was standing with Jaypaul and I looked at him and his eyes were closed, he couldn’t even look at me.”

“I went to him and asked, did you put me up as the wildcard? And he was like he’s sorry!

” And I’m like I’m not saying I’m mad but did you at least defend me, like Oh! Liquorose is not a wildcard but no!

And when Buggie asked her that, Would you have felt less betrayed if be had informed you before he made his nomination?

“Yes, Big Brother, I would have because I’m the kind of person that can handle anything as long as it doesn’t have a trace or hand of betrayal in it.”

“But he acted like he did not even know that wildcards discussion is going on and boom, he pulls me up.”

“What if I was a wildcard? You say you like me and kind of feeling something for me, I don’t what he feels like but you wanted to actually pull me out of the door.”

“Let’s say I was a wildcard, you actually feel like let her go!! No!

She concluded that she wouldn’t have felt betrayed at all if he had mentioned it because she understands they are in the Big Brother Naija House to play the game but for him not mentioned it, she feels he’s a “fake person”.

#BBNaija 2021: Boma Reveals Why He Saves And Replaces Jaypaul With Yousef [Video].

“This Man Is Sexually Harassing Me All...

Kaisha Argues With Neo, Calls Him A...