Reality TV star and entrepreneur, Dorathy Bachor, has expressed her anger after the men of the Economic and Financial Crimes Commission (EFCC), allegedly burst her apartment on Monday morning, 23rd of August under the guise of searching for a suspected Yahoo boy (Internet fraudster).

The Big Brother Naija Lockdown season finalist has taken to her Instagram official account to rant bitterly over the ignoramus act of men of the anti-graft agency who broke into her apartment while searching for a suspected yahoo boy.

The 25-year-old lady berates EFCC, saying if she can not feel safe in her own house again, then there is no need of being a Nigerian citizen. She added:

“It’s 5 am and I’m literally shaking and so upset right now. I feel like my head is about to explode, I’m numb!

Dorathy noted that she heard a loud sound and voices at 4:45 am and she had to rush out almost naked, she saw five fully armed EFCC officers in her living room. 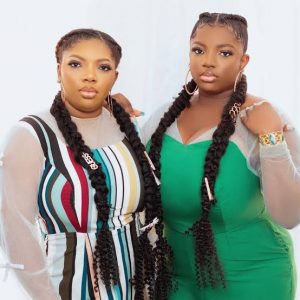 She said that while she was trying to understand what was happening and why did they break down her door, one of them told her they were looking for someone who ran into their estate, adding that she should lock her door, stay indoors and not say a word.

Dorathy added that she was shaking at that point and so confused because how exactly broken her door was okay to them that they were telling her not to say a word.

Read Also: How A Local Nigerian Girl With A Boyfriend Can Be Rude, And The Best Way to Reply Her

She added that while she was still shaking and trying to close her already broken door, her sister screams her name and she ran upstairs to notice that her mum almost having a panic attack.

See The Screenshots Below: 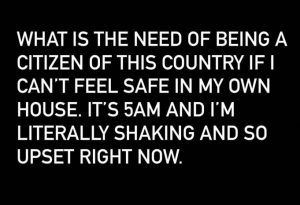 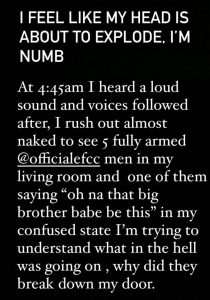 How A Local Nigerian Girl With A Boyfriend Can Be Rude, And The Best Way to Reply Her