Supporters of the English Premier League Champions, Manchester City, have sent farewell messages in a video to their Legendary striker, Kun Sergio Aguero, who is leaving the club this summer after a medal-filled ten years stay at the Manchester-based club.

The Argentinian striker joined City on 28 July 2011 and made his debut for the club on 15 August 2011 in a 4–0 Premier League win over  Swansea City. He came on as a substitute in the 59th minute, scoring his first goal for the club within nine minutes after a tap-in from a cross from full-back Micah Richards.

Aguero has been troubled by injuries this season which have limited his appearances to just 18, out of which he has only four goals to his name.

The Argentine made a farewell appearance at the Etihad Stadium against Everton on Sunday, coming on as a substitute in the second half and scoring twice to break Wayne Rooney’s 183-goal scored by any player for a single club.

After the match, City threw a special ceremony for the veteran striker after the team’s trophy lift and lap of honour, wearing a huge grin. 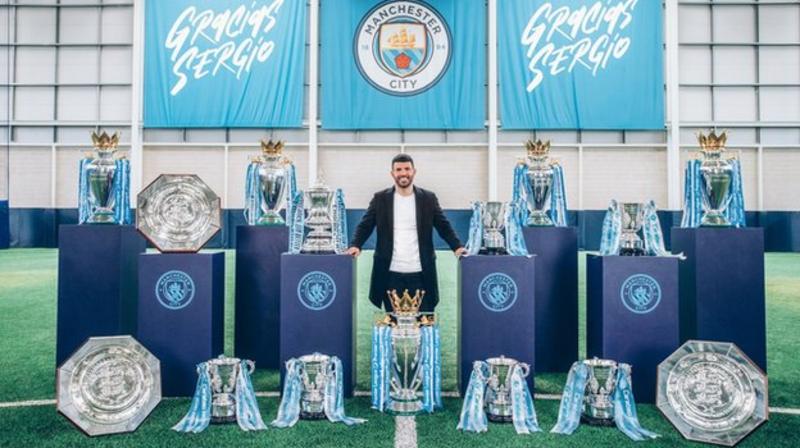 Speaking at the ceremony, Aguero said:

“I want to say thanks to everyone, the staff but also the fans.”

The 32-year-old was presented with a shirt showing the time of his famous goal against QPR; a 93:20 minutes screamer that snatched the 2012 title from United’s grasp and a lifelong season ticket.

BBC sports gathered that a mosaic has also been installed at the City’s training ground showing his first goal for the club in 2011, and a statue outside Etihad Stadium will follow.

Following the presentations, Aguero was thrown into the air by his teammates before walking down the tunnel on his own, still grinning, with one last wave for the cameras.

Aguero still has an opportunity to feature for City one more time when they face Chelsea FC in the Champions League final on Saturday 29th of May, 2021.

However, Sergio Agüero has agreed to join his countryman, Lionel Messi at FC Barcelona on a two-year contract by next month when his contract will expire. His preference to move to Camp Nou, has attracted a pay-cut, which he has accepted. Nevertheless, he will have the opportunity of receiving a bonus if the team wins the Champions League.

As a mark of honour, Manchester City uploaded a video on social media to celebrate their veteran striker and captioned it:

“Some familiar faces from around the City-universe pay tribute to the one and only @aguerosergikun.”

“Biafran National Guard” Threatens Nigerian Government, Says They Are Taking Over Biafran Territories As From May 30

“Man Who Says Women Like Money is Broke” – Pastor Suleiman

“United Can Beat Any Team In The...